A selection of free spanking photos from Janus 58.

‘All right Sylvia…’ Robert’s breathing was fast and heavy like it gets when we make love. ‘Kneel up on the sofa!’ Too scared to resist, I did so. ‘Push your bum well out,’ he sneered ‘so your lecherous friend here can take a really good look. It’s nice and pink now…’ Then he added ominously ‘ Soon it will be red as sunset.’

Kneeling up on the cushions, I confess I now arched my back to jut out my bare bottom in a deliberately provocative way towards the cringing watcher as Robert strode across the room and grabbed something from the cupboard. Then, with a disturbing quietness, he removed his jacket. And as I waited in dread for my punishment to resume I sensed the furtive, bespectacled gaze boring holes in my out-thrust bum cheeks in a way that sent naughty thrills rippling through me.

Robert stepped up behind me, raised his arm, and my bum cheeks were flattened by a blistering wallop that drove the breath from me in a shriek. I deserved this thrashing…

We hope you enjoy seeing these beautiful colour plates from Janus 58 which have been scanned from the original negatives. If you want to see more of Muriel’s punishment then you can download a copy of Janus 58 by clicking on the highlighted link. 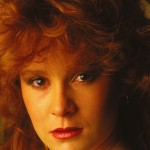 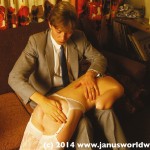 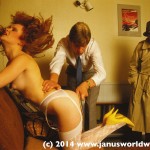 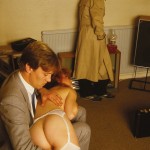 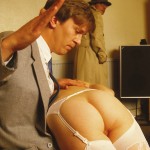 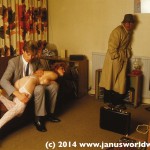 Just added to the Janus Online Shop this morning are three new spanking magazines. Janus Vol.2 No.3, Blushes Supplement 1 and Justice 64 are all available to download by clicking on the highlighted links.

Our thanks again to James for his excellent work recovering and restoring Blushes Supplement 1.

Don’t forget to download a copy of Stephen Sim’s wonderful new novel ‘The Bottom Man’. A full interview with Stephen is still available to read here.

Not a lot of people know that Stephen Sims, a successful published author under another name, wrote photo stories and other fiction for well over 100 issues of Janus! He also starred as Roger Storing and Royston Arnold in numerous photo shoots and went on to edit Privilege Plus and Privilege Club.

He sat down with Janus archivist Jon Rayworth just before Christmas to talk about his many years working for the magazine and to discuss his new novel, ‘The Bottom Man’, which is published today. In a wide ranging interview Stephen shares his recollections of the photo shoots he appeared in, the people he worked with and the daily distractions of life in the Janus Office!

You can read the full interview in ‘The Janus Writer’s Tale’ by clicking on the highlighted link.

To download Stephen’s new novel ‘The Bottom Man’ click on the link below or you can read a free chapter here. 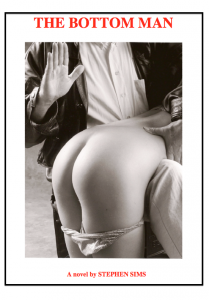 ‘THE BOTTOM MAN’ – A NEW NOVEL BY STEPHEN SIMS

Stephen Sims has the distinction of being the longest serving contributor to the modern Janus run. Working alongside Peter French, Vic Barnes and Paula Meadows he wrote the photo stories for the magazine and appeared as a model on many occasions. We’re delighted to be able to publish a free chapter from his new book ‘The Bottom Man’ in advance of it’s launch on Friday.

Stephen recently met with Jon Rayworth to talk his time working on the magazine and they also discussed the background to this new novel:

Jon Rayworth: After quite a break you’ve come back to writing about the subject of corporal punishment in your new novel ‘The Bottom Man’. Tell me a little bit about the novel and how you came to write it.

Stephen Sims: For a long time I’ve wanted to write a story about a decent and caring man who finds himself inexplicably drawn to the idea of erotic spanking, and of a young married woman with a responsible job who finds herself fascinated by the idea of being spanked. And neither knows why. How they eventually get together in the book is really an adult comedy of errors, and when they do the result isn’t at all what might be expected. But don’t expect an extended piece of highly-charged Janus-style fiction, this is an I hope insightful and realistic story of two people, puzzled by their rather ‘strange’ and socially unacceptable desires, who find each other through these desires, with many a slip-up and misunderstanding along the way. I’ve used my experiences of working in the business to give an authentic background, even to the reality of how those magazine photo shoots would sometimes go! Even the content of certain erotic correspondence in the novel is taken from life and not invented. Then there are the all-too-often misguided prejudices indignantly aired by those who don’t or won’t or are afraid to understand the adult need (because it is a need) by others to spank or be spanked in a mutually consensual way. As will by now be obvious, this scene has long fascinated me, which is why I couldn’t resist writing about it. And at last it’s ready! I hope readers will emote with, empathise and enjoy it.

JR: The novel also includes quite a few unpublished photos, in particular some lovely previously unseen images of Lucy Bailey and Christina Winchester (aka Rosaleen Young). What made you decide to include those?

SS: Well, they’re not intended to illustrate the ongoing action, but rather to reflect the atmosphere stimulated by the respective male and female heroes’ subconscious fantasies at certain points in the narrative. I think they add something and I hope readers will enjoy seeing them.

You can read the free chapter from ‘The Bottom Man’ by clicking on the highlighted link. Check back on Friday to see Jon’s full interview with Stephen and to download a copy of his novel.

Fiona Lewison concludes her ‘Janus Weekend’ with an arousing account of a sound caning. Our thanks to Fiona for continuing to contribute so many wonderful articles to the site. You can catch up with all of them on our free Spanking Stories page and have no fear – Fiona Lewison will return!