It was nice to hear from our old friend Pat Greenham who sent us the attached. Please enjoy!!

Extra, Extra, Read All About It…

Collectors of Janus magazine will be pleased to hear that soon we will be publishing a series of digital downloads containing high quality scans of surviving original prints and negatives from a selection of popular issues.  Each digital download will be affordably priced at just £1.

These ‘Janus Extra’ digital downloads provide crystal clear images from some truly iconic photo fantasies and represent a great way to enhance your favourite Janus photo shoots. (Please note the number of each issue of ‘Janus Extra’ corresponds with the number of the original Janus magazine from where the photo stories first appeared.)

I can still remember how my heart leapt to my throat the first time I entered the Janus Shop at 40 Old Compton Street. It was the late winter of 1986. I was 22 years old and visiting London with my parents, who were stationed with the US Diplomatic Corps across the ditch in Belgium.  How I learned of the shop’s existence I can no longer say – very likely from an advert on the back page of a tourist guide. I am even certain that I knew of Janus as a publication then, although my hyper – sensitive ‘spanko’ eye would have scarcely missed it on a newsstand. In any case, I was convinced that I harbored a shameful secret, like Cain cast out to wander Earth alone – and without an internet password! What a revelation that Old Compton Shop was! I felt like a kid in the proverbial candy shop. I rushed back to my parents’ hotel with my magazine purchase in a black plastic bag, locked myself into the  bathroom, read every word from cover to cover, and in the process made very short work of my member – and undoubtedly more than once (what joy and what torment to be so young!). From that moment on the artwork and stories became a fixture of my sexual life. They were still with me when I finally found my first spanking partner, some thirteen years later. Even today specific images come back to me unbidden , from this photo – set or that drawing or from this or the other story detail. How exciting to come across this website now and see that the old world has not been forgotten: I feel like a former East German with ‘Ostalgie,’ or like someone who grew up in the old Soviet Union. It’s delightful to recognize my old favorite images – and discover new ones I missed the first time through. And BTW , Paula Meadows , I love you!

We would love to hear your old Janus memories. Tarquin

Wishing all our friends and customers a very Merry Christmas and a prosperous New Year! With thanks and best wishes from everyone at Janus! Targuin 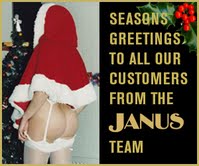