Fiona Lewison concludes her account of a weekend of continuing therapy in an old house in the country with creaking stairs, draughty corridors and a menacing figure of authority watching her every move… 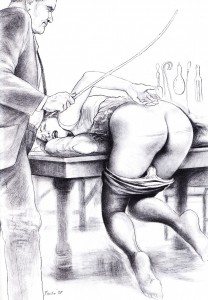 7.15am I’ve had a shower and I’m ready for Susan to bring my breakfast. It’s a Sunday, but it doesn’t feel like one. I have work to do. I have a battle to win.

7.25am A new list of instructions has just been shoved under my door. Susan doesn’t work on Sundays, and I have to make my own breakfast. I’ve got to report to the study at 9am for another task, and my final treatment is at 11am. The task gives me another chance to shine, and I’m incredibly grateful.

8.10am I’ve had my breakfast. Maurice was nowhere in sight downstairs, so perhaps he went back to bed. Three hours till my caning. At least I’ll be busy doing something, whatever it is.

10.05am I scored 9/10 and was given a spanking. It was entirely in accordance with the rules, and I’m not complaining. I’m disappointed with myself, but Maurice was right to punish me. I was careless, and I deserved it. It’s fair, and that’s what matters. The spanking wasn’t particularly hard or long, and I’m sort of getting used to it. I know what to do in my head, and that’s what counts.

My task was to tidy up the study. I had to dust all the surfaces, arrange everything neatly on the desk and hoover the carpet. The hoovering and desk-tidying were deemed “highly satisfactory”. Then Maurice ran his finger along the surface of a shelf and thrust it under my nose. I’d missed it. Now I see a pattern to all this. I’ve been a secretary, a cook/serving girl, and finally a cleaner (or more likely a ‘housemaid’ in Maurice’s mind). It’s Janus, isn’t it? OK, no schoolgirl, but I can’t believe that fantasy isn’t on his mind. The old rogue! I shall have words later!

Oddly enough, this realisation has lightened my mood and I feel pretty confident. If I had difficulty with the strap, the cane is going to be a thousand times worse. But all I have to do is take 10 strokes (presumably). If I behave well, that’s all I’ll get. If I behave badly, I could get a lot more. I don’t know how hard Maurice is going to do it, and I don’t know whether I’ll cope, but I’m going to try my best. That’s all I can do.

10.55am OK, I can do this. I’ve spent 10 minutes on the bidet, and I’ve been to the loo about six times. I look as good as it’s possible to be in this bloody housecoat, and I’m as ready as I’m going to be.

11.35am I did it! I’m ecstatically happy! My bottom is a complete mess, but I don’t care. I’m going to use the rest of the arnica cream, and throw the tube out of the window. Hopefully, Maurice will be in the garden and it will land on his head. I can do anything now. Anything I like. I tore off the housecoat, and I’m going to burn it. And dance round the fire like a deranged witch. Then I’m going to run naked through the town. OK, I’m not. But you get the general idea.

I got 11 strokes. I messed up on the first one because it hurt so much, but I took the next 10 strokes with a resignation that I didn’t know I possessed. It was an intensity of pain that I’ve never experienced before, and the build-up was just as difficult to bear. Unlocking the cupboard and taking out the cane was enough to induce a trembling panic, and I could quite easily have fled the room, packed my bag and ran screaming to the station. All 14 miles of it.

Handing the cane to Maurice was, as you might imagine, difficult. For a split-second I held on to it with a pretty obvious reluctance to let go. A reluctance to let Maurice take the driving wheel of this very powerful car. If I’d had a choice, it would have been left in the garage. The odd thing was that this otherwise innocuous piece of wood looked much more comfortable in Maurice’s hands than it did in mine. I realised that I had held it softly and tentatively, perhaps in a female way, and that its owner had treated it much more casually. Like an old friend. The cane looked like it had been deserted for a while, and was pleased to see its master. Pleased to be back in familiar hands.

This odd series of thoughts, which ran though my head in only a moment, helped me to understand what was to happen. It was like delivering myself into someone else’s hands, and knowing that the cane belonged to Maurice and not to me. It was going to grace my bottom in an unfriendly way, but somehow I saw it not as an inanimate object with a hateful mind of its own, but as a necessary extension of Maurice’s arm. He had smacked me with his hand, and now he was going to smack me with his cane. Simple, really, and nothing to be afraid of.

The problem was that the first stoke shocked me so much that I jumped up and clasped my bottom. I imagine there might be some gentlemen here who were caned at school, in which case they will recognise the odd sequence of events. There is a very obvious moment when the cane strikes, then nothing. Then suddenly there is a tearing pain. It was that moment that induced the panicked response. Understandable really, for someone who has never experienced it. From that moment on, I knew what to expect. I knew what was required of me to survive and, more importantly, to get the benefit of such a punishment. It’s supposed to hurt, and that’s what makes it worth undergoing. I survived. It wasn’t easy, but I found I could do it. I’d got my head round it, and was unreasonably happy with myself. I said “Thank you,” and I really meant it. I felt grateful and happy and amazingly self-assured.

So I bounded up to my room and fell on the bed and cried. I had done it. I had been though something that I knew would help me and make me feel better. And it had. I was already thinking about the future and what I could do to influence it. I was also thinking about the enormous gin and tonic I was going to pour myself.

12.30pm One lingering rule remains. I’m not allowed to go downstairs till 1pm. I’ve had a shower and peered closely at my bottom. It’s covered in red marks that have already turned into bruises, from about half-way down to the tops of my thighs. It doesn’t hurt at all, but I’m going through what I suppose every woman goes through in this situation. I’m worrying whether the marks will ever go away. They look deep and angry and like they’re cross with me. But I know that they’re not self-inflicted and that I can blame someone else. My bottom will still love me. Stupid, I know, but very important right now for some inexplicably female reason. I feel a great urge to bake a cake and iron a man’s shirt and do some tidying up. There, I’ve said it.

1.35pm I’ve popped up to my room to get my things before we go to lunch. Having not had a drink for a while, I feel light-headed. OK, drunk. Oddly, I feel uncomfortable in my ‘human’ clothes. Constricted, somehow. Maurice is back to his normal charming self, and I feel hugely relieved that we will be able to talk about what has happened. I need a breakdown of events to understand more about how I behaved, and how Maurice felt. I need a debriefing so that I can assess fully whether I met his expectations. I need to make sure that he got as much out of this as I did.

7.30pm I’m back in London. Maurice and I had a long talk over lunch and back at his house, and I can say unequivocally that the weekend has been a huge success for both of us. Maurice said that he has never experienced such a prolonged and intense pleasure, which made me very happy. My attitude and behaviour were “perfect”, and I am a “very attractive woman”. It was sweet of him to say so. And I was right about the series of Janus characters. Maurice looked a little embarrassed when I pointed this out, but then we chatted for ages about our favourite covers and models and I think it was a great relief for him to talk to a woman about his passion. It was my passion too, so we had nothing to hide from each other. This, inevitably, brought us to the ‘schoolgirl’ question and – surprise, surprise – Maurice is rather keen on the idea. I protested that I’m far too old to look the part, but it didn’t seem to deter him. Men are very odd like that.

Maurice also questioned me at length about whether I’d got everything out of the weekend that I’d hoped, and I was able to say that I had. I had gone through a range of emotions from loneliness and exasperation, to anger and happiness, but most importantly I had completely immersed myself in the role of a submissive woman, and I had enjoyed it. I feel a huge sense of achievement, better about pretty much everything that lies ahead. It’s been an extraordinary experience. An exercise in yielding to another’s will for my own benefit. The concept is very strange to a modern woman, but I know one thing: I’m going to do it again.

You can read all of Fiona’s wonderful contributions to Janus on our Spanking Stories page.