We were delighted to recently hear again from longtime Janus correspondents AM and JA. The last time they contacted us AM was hoping to persuade JA to write about her experiences of receiving corporal punishment. I’m pleased to say that JA has been kind enough to email us her memories and thoughts about this aspect of their relationship. She takes up the story:

Let me begin by telling you that when we first met I knew nothing about spanking, and never ever tried anything like it in any earlier relationship. I had received nice compliments about my bottom, which was very flattering and, as any woman will tell you, does make you feel nice. I had the odd playful smack at times, but thought nothing of it really.

We first met when he was home on leave from the Army. A chance meeting really, we both decided to go out at the last minute. He actually knew a friend of mine, who was with me that night, and she had a crush on him, but he kept asking her to introduce me to him. Anyway, she finally did and it went from there. The first spanking I got from him was one evening after coming back to my parents house after a night out. He found an excuse to put me over his knee, he took my panties down and started to spank me. I must have been very stupid even then not to realise he was into this in a big way. After the spanking I was rubbing a very warm bottom and worrying about the noise we were making, as my parents were asleep upstairs. He was watching me frantically rubbing my sore bottom and, before I knew it, we were on the floor having a mad sex session.
Our relationship continued and we got married with me still not realising he was into spanking in such a big way. We bought a house but he was still away a lot of the time, so I stayed with my parents a few days each week. We exchanged many letters and phone calls and he would ask if I had been naughty – an excuse to spank me when he came home, which of course he did. When he finally left the Army he brought home all his kit and among this were three large boxes which he put to one side of the room. When he was out for a while I became curious about these boxes and opened them. They were full of spanking magazines – there must have been a few hundred of them. I think at last the penny dropped!
When he returned home later I was really angry and demanded to know why he had not told me properly about his love of spanking. Of course he replied that there were enough hints and assumed that I had realised this. I really still thought up to that stage, it was just a fun thing but this was a lifestyle for him and would eventually be for me too. It was not long before spanking was on the agenda just about every week, how my poor bum stood all that I don’t know. When the first video cameras came out he decided we should try some videos of our own. He had lots of spanking films, including some from Janus. The first spanking film I ever watched was St Winifred’s with Jilly Norton. I didn’t think I could do it but now, years later and many videos completed, I have done. I’m not always confident but AM tells me some of our efforts were really good.
As he has told you we still make videos when we go away for a break. He always has his cameras at the ready and I don’t mind, as I get a paid holiday out of it! Mind you, how much longer I can go on making videos and modelling for the camera I am not sure. Like a lot of women in their fifties, I have put on some weight, from a size 12 when we first met to a… well I don’t want to say but also two children as well. Would I have stayed with him if I knew about his spanking lifestyle? Yes, I think so.
I don’t know if there is much more I can add… I did try and arrange as a birthday treat for him a chance to spank another lady, but unfortunately that fell through. Because of his love of spanking I wanted him to see how he felt with another lady draped over his knee – maybe I will try again for him one day. I hope this will be interesting for you, and give you an insight to what is now our world of spanking. 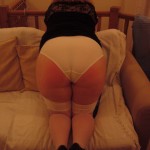 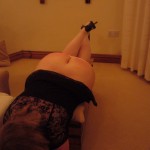 We are very grateful to JA and AM for giving us a glimpse into their ‘world of spanking’. JA was also kind enough to include two more photos which you can see above.
Logging In...