Concluding Fiona Lewison’s commentary on the six spanking images that resonated for her. You can read Part 1 and Part 2 by clicking on the highlighted links. 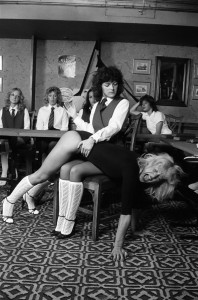 I wouldn’t normally have chosen an image of a woman being spanked by another woman, because my adult dreams and experiences have always included an assertive male figure. But in this case, I’ve made an exception. It is, of course, the magnificent Gilly Norton in her role as the head girl of that peculiarly old-fashioned establishment, St Winifred’s. What I love about this image is Gilly’s approach. She is simply performing one of the head girl’s many duties, and she does it in the same brisk, business-like manner that she might marshal the fifth-form girls for a cross-country run or supervise lights-out in the dormitory. It’s Malory Towers updated to the early 1980s.

There are some incongruities, such as Gilly wearing stockings with school socks and strappy high heels, and the girl on the far right is looking rather bored with the proceedings, but it’s still a masterpiece of spanking photography.

The full set of St. Winifred’s photos can be found in Encore Janus 1 and the St. Winifreds trilogy of films, The Athletes’ Lesson, The Sixth Formers’ Lesson and The Head Girl’s Lesson are all available to download by clicking on the highlighted links. 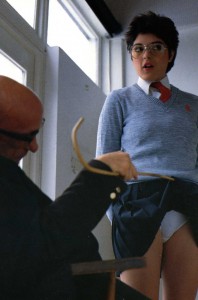 This photo unnerved me when I first saw it all those years ago, and it still haunts me today. It’s a classic understated image from Blushes, (additional photos from this set can be found in Blushes 8) but I find it very powerful mainly because of its shocking wickedness. To suggest that it is unacceptable for a male teacher to raise a girl’s skirt and feast his eyes on her tight school knickers would negate pretty much every schoolgirl spanking photo ever created, but that doesn’t make it even remotely right or proper. But, obviously, it’s the impropriety that makes it thrilling. It depicts something that’s cruel and wrong, and we shouldn’t endorse it, but we do and we excuse it on the grounds that it’s a fantasy. But make no mistake – it’s a very wicked fantasy.

The picture shows a lascivious headmaster exploiting his position of authority quite openly. It’s perfectly clear he’s not just checking that the girl is wearing regulation knickers. He’s enjoying an hors d’oeuvre before the main course. In a little while, he’ll take those knickers down and cane the poor girl on her bare bottom. And if that wasn’t sufficiently immoral, he’s going to get a serious sexual buzz out of it. All of this suggests that I disapprove, but I don’t. I love this photo as much as any man might, but perhaps in slightly different ways. I am, after all, identifying with the girl, not the man.

What’s slightly puzzling is the girl’s expression. She doesn’t exactly look comfortable, but she doesn’t look particularly frightened either. There is a look of surprise and mild indignation on her face, and in today’s parlance I think she might be saying, with that peculiarly American inflection, “Excuse me?!” But this is a bygone era, and our schoolgirl wouldn’t dare say anything. She has no choice but to put up with the lecherous advances and the stinging punishment that will inevitably follow. It’s a chilling thought.

So, there’s my personal Six of the Best. If you have a different view on any of them, and I’m sure you do, please leave a comment below. I’d love to hear from you.