Continuing Fiona Lewison’s commentary on the six spanking images that resonated for her. You can read Part 1 here. 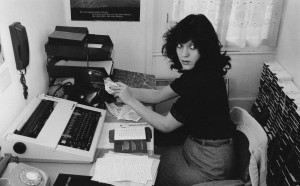 We now move on from domestic and school punishments to a young woman who’s left all that behind her and is fending for herself in the big city. She’s got a job as a secretary, but she’s finding it difficult to make ends meet. She sees a chance to supplement her meagre income, and grabs it. She thinks she’s got away with it, but we know it’s the biggest mistake of her life. The character’s name is Tracy Wilkes and the photo, from a shoot for Janus 27, didn’t make it to the published edition. But I think it sums up not only this particular photo-story, but the whole Janus ethos. Here is the crime actually being committed, a crime which we all know is going to result in a very sore bottom. And now we can anticipate the punishment she will receive. The girl is wide-eyed with fear, and we can feel it too.

I also think this young secretary knows that, if her boss catches her out, he won’t simply fire her. It’s an old-fashioned office in an old-fashioned company, and she’ll be subjected to a dose of traditional discipline. He’ll put her over his knee and smack her bottom. And if the thefts have been going on for some time, she can expect something a lot more serious. What I like about this is that it’s entirely fair, even though we can guess that the boss is going to enjoy himself. And who can blame him?

The picture also resonates with me because I worked in a similar office, with that exact same Brother typewriter. My youthful dreams of being spanked by my boss all those years ago came flooding back as soon as I saw it.

Fear and loathing in suburbia 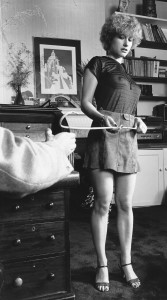 This photo really intrigues me. I like it very much, but I don’t know quite what to make of it. The character is Serena James and it’s from a photo-shoot in Janus 16 published in 1982, which is about the time when I first became fully conscious of my own feelings on this subject. It’s obviously a domestic scene, and it would be perfectly reasonable to assume that the extended male arm belongs to the woman’s husband. But the expression on her face suggests that she is not as comfortable being punished by this man as she might be by her husband. There is a lack of conjugal trust in her features. She’s uncomfortable, and not just because she’s about to be caned. I think she doesn’t know this man. He’s an unknown factor, and that’s what scares her. If it were her husband she would presumably know what to expect. Her face would show resignation, perhaps even anger, but not fear. She would not stare at the cane as if it’s an unknown threat. She would not hand it over inch by reluctant inch, as she is in this picture.

So I think the man is a stranger, or at least a stranger to her bottom. He could be her boss at work, who has elected to administer some much needed discipline in the privacy of his employee’s home. Or, and this seems to be a fairly common theme, he is a professional disciplinarian called in by an outsider, or even the woman herself. But what’s obvious is that she doesn’t want to be caned by this man. We know she will be, and so does she, which makes it a thrilling, and quite scary, picture.

My only complaint is that the director and photographer should have taken greater care over the model’s comfort. It’s obviously freezing cold in that room.

You can read the final part of Fiona’s ‘Six of the Best Spanking Images’ on the news page next week. You can download the magazines in which both these photo fantasies appear by clicking on the highlighted links.