A Caning Story by Tom Haggard from Februs 8. More stories are available here.

‘DO YOU THINK, IF WE ASK NICELY, HE’LL BIRCH US?

Peggy sighed: ‘Jane’s feminism in not worn lightly – even in Vienna!’

Dull, conciliatory, Jilly. Peggy had often wondered how she had got  on the same course. Then one day she saw her in suspenders…

Jane, on her bed, was grunting agreement with ‘The Guardian’,

‘I’m sorry, Jane. When I saw that dish birching his Lipizzaner stallion, I thought we could hire him for the night…’

Jane turned to the Women’s Page. Peggy snatched it from her hand: ‘God knows, something’s got to happen.’

Jane covered her face. She confessed: ‘I was thinking the same. A regular whipping across the bare, is the only way I shall pass these exams…’

The two other women stared. Was this right-on Jane?

‘I’ll run back to the Spanish Riding School….’

‘No, Peggy. No fascist in a silly hat takes my knickers down! Let’s ask Tim!’

Peggy and Jilly fell about.

Tim, the  Course Organiser. Tim with his open sandals and herb teas! New Age, wimpish, bearded Tim. Jane could not be serious.

‘I’ve been looking at his C.V. in the  Prospectus. He has taught in a few controversial establishments over the last five years. He must know one end of a cane from another….’

‘It’s out of the question.’

Jane continued: ‘We’ve been paid to study computer technology. We are about to fail our exams. We blame you!’

‘Blame yourselves! Blame Vienna! The cafes, the Opera, the Balls….But don’t blame me!’

‘Discipline here is non-existant. We will inform our companies. Unless you cane us. Once a week. Every week.

‘I disapprove of corporal punishment.’

‘But you know how to cane?’

‘Then cane! We need inspiration!’

‘Where can I find a cane in Austria…’

‘Anywhere. Any stick will do.’

Tim exploded: ‘You know nothing! A cane must be made of a flexible substance-like rattan. Otherwise it will bruise the buttocks and the weals will be short. The art of canng is to produce a stinging, painful, lengthy weal that runs right round the hip without breaking the skin a weal like two thin tram0tracks that will last for a minimum of three weeks….’

‘A weal that cannot be sat on for at least five days….’

Tim saw the girls were staring at him. He turned red.

Peggy was the first to speak: ‘Then get a cane from England. We’ll give you the air-fare.’

Jane was next: ‘How were your other miscreants dressed when you beat them…?’

‘Then we’ll do the same,’ said Peggy.

‘I have been manipulated.’

Tim looked up from his journal as the plane came in to land.

He added: ‘For the whipping to  work, their wills must bend to mine.’

The shop in New Oxford Street, where he had bought his first punishment cane, no longer stocked them.

‘The bottom seems to have dropped out of the market, sir. Try a sex shop…’

That summed it up. Tim had stopped caning because he enjoyed it. He had fled from himself. he had become a New Man.

He flexed a slender cane in a Soho shop. He felt its power, And with it the return of his mastery. He became , once more, the brilliant graduate, ready to conquer the world. And he would start, as many before him, in Vienna.

At ten o’clock, that evening he entered the common room. The women were in pyjamas and dressing gowns.

Tim swished the cane: ‘Dressing gowns off and hold your ankles!’

The girls shook. The girls obeyed. They lined up and bent over.

Tim yanked their pyjama bottoms downto their ankles, then pushed their jackets to the nape of their necks.

He studied the naked girls and then he decided.

‘I refuse to cane you dressed like this! It is totally inappropriate for young women in Vienna. I will whip you tomorrow evening at the Prater,Vienna Style! ‘You will dress in your best suspenders, pants and gowns. You will ride with me on the Ferris Wheel. Here are you tickets and times…. He laid one ticket in each girl’s bottom crack: then he was gone. 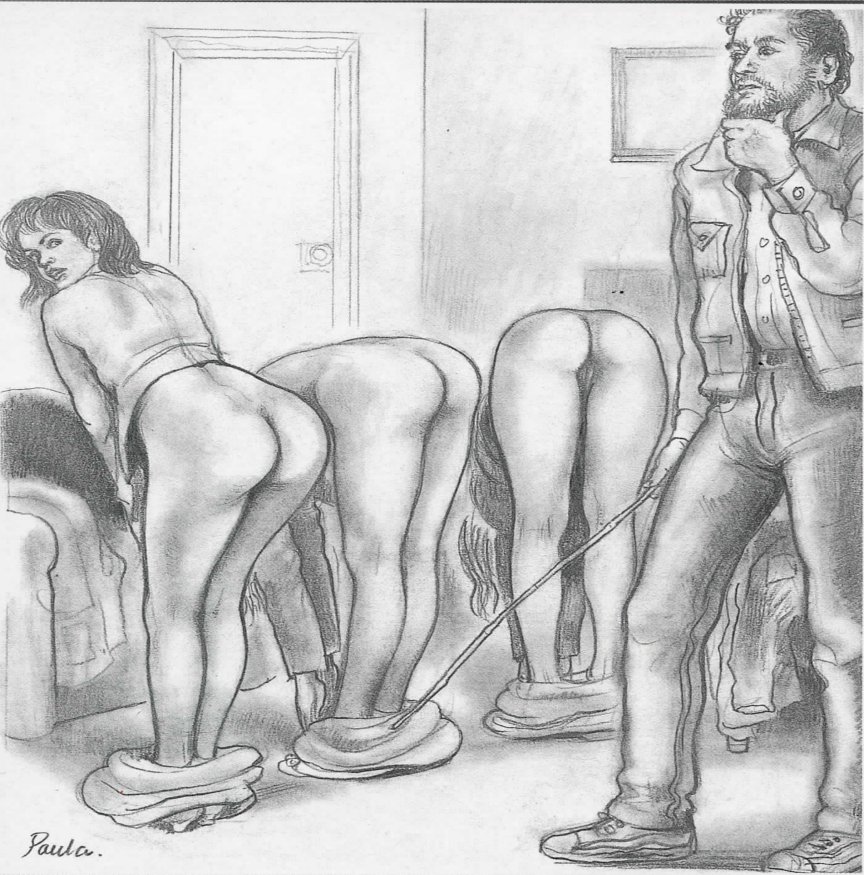 The girls were in and out of each others rooms, parading suspenders, swapping pants.

Each took a long, scented bath: and each fingered her buttocks….

The girls took a taxi to the Fairground. The famous Ferris Wheel, suspended by wires, floated in the sky.

One of the carriages had curtains and a table. it came to rest on the ground. Tim, glass in hand, stepped out.

His beard was gone. he was in evening dress. He looked handsome and dark. Like the devil….

‘Jilly, take champagne with me!’

How Jane would hate that ‘sir’!

Her long, gartered legs began to tremble as she entered the carriage, Tim closed the door. The carriage swept into the air…

Jane and Peggy watched the Ferris Wheel from the adjacent cafe. They watched each carriage fill with people. Then, halfway up, they saw the curtains in Tim’s carriage close…

They sipped coffee.They sipped brandy. Then half-way down the curtains opened again. The girls left their drinks to greet Jilly.

Her step was uncertain, but her eyes sparkled.

She entered the carriage, baffled.

Jane took Jilly to the cafe.

Jane touched her hand and ordered a brandy.

Jilly looked round at an Austrian girl in the corner.

‘I don’t want to steal your experience…’

This was not Jilly. Something had happened.

The two women watched the Ferris Wheel in silence. #Tim;s carriage was halfway up: the curtains closed.

‘What happened? Tell me! Please!’

‘When I entered the carriage, Tim poured me a glass of champagne…

‘Sounds soon out-ravished the sights. Strauss waltzes, Lehar waltzes, from cafes and ballrooms, from bandstands in parks, mingled in the night air to one great dance….

‘Tim told me too close the curtains and strip. I felt stupendous! Yet so attractive. And, in your tiny pants, so right…’

‘In one movement he undid my bra, slipped off your pants and laid me over his lap. I knew then, for certain, I pleased him…

‘I shall spank till the carriage reaches it’s apex,’ he said.’And then, Jilly, I shall cane.’

She gave a cry. The curtained carriage had reached it’s highest point.

She closed her eyes. For the first time her hands moved to her buttocks. Tears welled and fell.

Pershaps wshe was crying for all three…

‘What’s happening to her?’

‘Her legs are wide apart. Red-arsed and raw from her spankiong, she is gripping the far end of the table. She is counting the strokes for Tim. And thanking him for them…’

‘What is she feeling?’

‘Liberation. Her cries are mingling with the cries from the Fairground. The crack of the cane is taking its rhythm from the Waltz…’

‘The first stroke is intolerable. ‘I screamed, stood and clutched my buttocks.

‘But Tim was kind. He eased me over the table again.The whipping proceeded: pain ceased.

‘It changed to something else, something I cannot name.

I was still sobbing. My backside was cut.

‘But I was a sacrifice to my own divinity.

‘My head exploded in stars…’

‘Did you stay in place after the first cut?’

‘My bottom did. But my spirits rode in air…’

The Wheel moved again. The curtained carriage started its descent.

‘Now Tim is rubbing cream into Jane’s buttocks. He is wiping her eyes. He is helping her into her bra and pants…’

The two girls left the cafe to greet Peggy.

The girl in the dirndl hovered by the door…

Peggy, dazzled, wept. Jilly led her to the cafe. Jane took her place.

The two girls, hand in hand, watched the wheel’s progress; past and present danced.

The curtained carriage reached its zenith.

The girls unlocked their hands.

They sought each others stripes…

The whirl was over. Jane strode out of the carriage, thrashed, but in command.

The three turned. it wa the girl in the dirndl. She spoke perfect English.

‘I will take a ride with you, Tim. In true Vienna Style!’

The girls stared. Tim laughed. The carriage was off.

The three went back to the bar and ordered brandies. They looked at the carriage. Its curtains closed. it began to sway.

Jane, laughing in spite of her weals, posed the question: ‘What Vienna Style did she mean….? 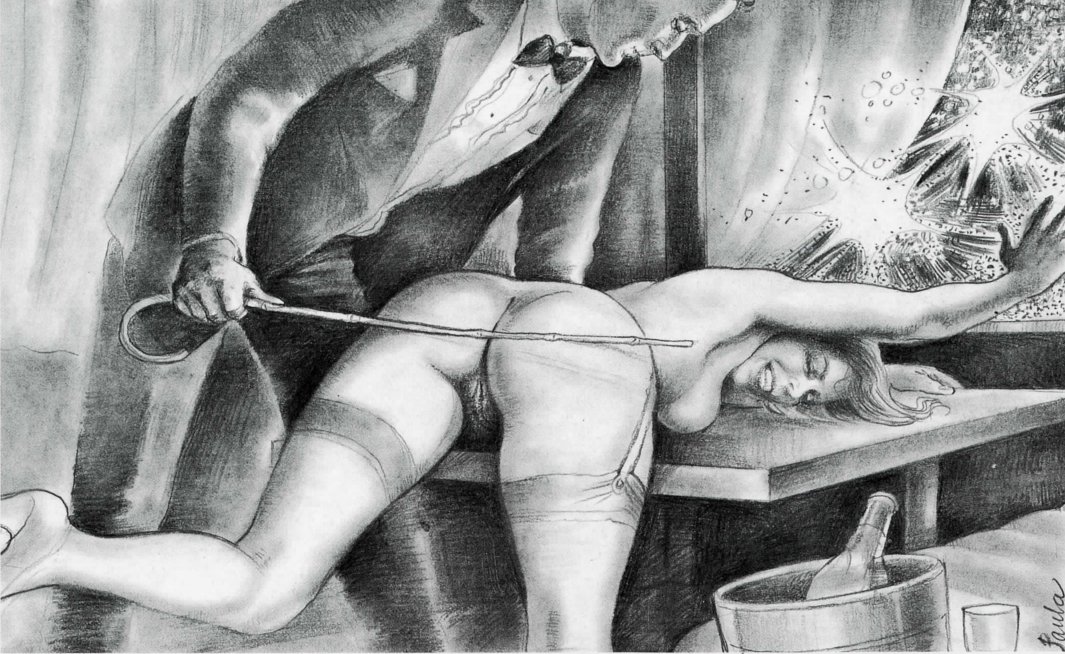