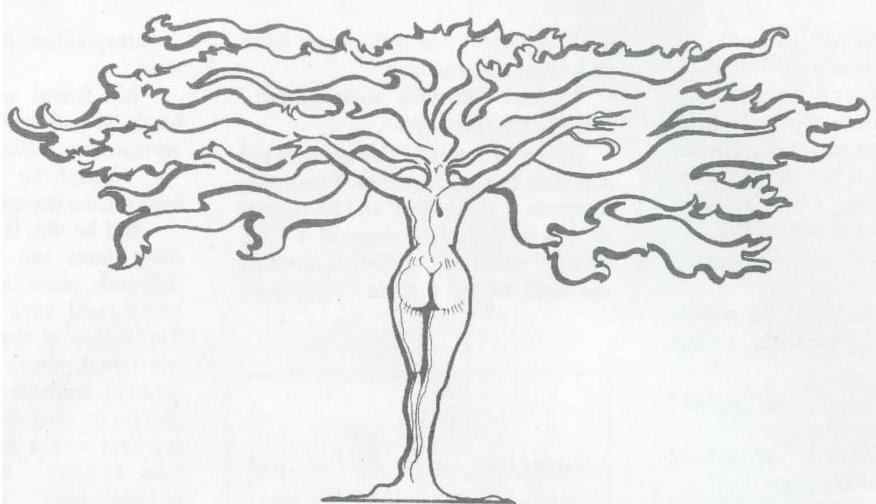 When was it, I wondered, that I found my tree? My special tree. Long ago and far away. I must have been in my early twenties.

‘The Story of O’ came into it somewhere but I’m not sure where. A girl friend had given ,me Pauline Reage’s book and I had read it and I was amazed at my own reaction to it  Mine, and that of so many other women too. I read it as fantasy. I had no belief that people actually explored pain in that fashion as a reality. But I remember my tree.It stood proudly in a clearing in a thickly wooded part of the heath a stone’s throw from my flat.

It’s roots were large and gnarly and they sank deep into the soil impregnated with compost. Shit and dung all the four letter realities I’d never been allowed to talk about at home or discuss at school. its branches lifted upwards to embrace the sky and every twig was a fingertip pointing tot he sun by day and the moon at night. We recognised each other at once, the tree and I. It was full of aspirations it didn’t know how to fulfil, just like me. I had come to London to seek my fortune but I had no idea exactly how I was to accomplish that small thing. Sing, dance, act, I didn’t know. if I didn’t think of drawing and painting it was because I’d always done both and I didn’t regard them as being talents at all.

AH, I hear you murmer, If the tree was in a clearing in a wood there must have been lots of other trees so what made that one so special? You’re right, there were lots and lots of other trees burt all they offered me was three miles of trunk before I could reach the branches and I am no use at climbing trunks.MY tree was not like that. its thick branches started low down, It was a climbable, friendly tree. A foot on a  protuberance a quick heave and I was up into the lowest fork and lying across it with my bare skin touching and revelling in the rough texture of the bar5k. I am not a tomboy by temperament and had no desire to beat the boys to the top. No desire to excel over the boys at all as a matter of fact.

I am sure there are things that women can do better than men can do them, but there are also things the men do better than we can I let them do it quite happily. There is nothing in me which corresponds to the angry feminist chanting “Anything THEY can do we can do better.” I have no interest in that sort of competition. I’d be bound to lose anyway if some idiotic government wanted to drag us all into a war I have no vision of myself as an Amazonian girl with a sten gun over my shoulder and a Colt in my belt. No way. I know myself too well. I’d either fire it with the safetycatch on, or forget I’d released it and shoot myself in the foot! Don’t offer me the presidency of the I.C.I. either. I wouldn’t know or care what to do with it. I don’t even walk through woods to visit my special tree on my own.

It was a warm summer twilight when my male friend and I were walking companionably across the heath and I found my tree in a clearing. The shadows were lengrthening and the sky was a deep purple with a frosting of stars but I still remember the heat as being oppressive. i stopped and leaned against my tree. Beyond the footpath there stretched an open clearing.

“Do you know what I’ve always wanted to do, ever since I was a little girl?” I said.

My companion grunted rustily. “No,” he said. “I’m not in the guessing game business. Until you tell me I’ve no idea what it is you’ve always wanted to do.”

I’ve known him on and off for many years and he wasn’t in the guessing game business. He was a classical musician and about fifteen years older than I. A blocky sort of man hovering towards middle age but in no hurry to get there.

“I wanted to find a lovely dark open space where I could take off all my clothes and run around feeling naughty.”

“Oh I couldn’t possibly” I cried.

“Why not? You’re wearing that ‘What would mother think’ look on your face but since she isn’t here and I’m not about to tell her, go ahead. No one will see you, You’ll be a pale blur at a yard and invisible at two.”

“There are men walking dogs.” I said.

“Men who walk dogs” he replied equably  “Don’t see anything, except dogs.”

I searched for another excuse but I knew I hadn’t go any more.

“If it was me, I’d do it.” he said and began to unbutton his shirt.

Thus challenged what could I do? I knew him. In half a minute he’d be stark naked on the footpath. One thing I did know that girls do better than men is strip. He was all right, my mysician friend, but he was never going to be a runner up for Miss World. Nor was I, but I had done some modelling. I took off my blouse and stepped into the clearing. Bra, skirt, panties and shoes followed and I was away, running barefoot in the grass with the air swirling between my thighs in a breeze entirely of my own creating. It was lovely, “Wheeee” I squealed and I ran, and I danced and I leapt about like a mad dervish until I wanted to rest. I flung myself onto a grassy hummock and rolled over on my back and stared up at the stars.

A burly shadow loomed over me and my friend’s deep voice said “Feeling better now?”

“That’s good,” he said “And now, tell me. Do you remember behind which bush you put your clothes?” I shot bolt upright with shock. I stared around and started to panic. There seemed to be bushes everywhere. Hundreds and hundreds of them and I hadn’t the faintest idea which one I’d used as my temporary wardrobe. Feverish visions of having to walk back to my house through the suburban streets began to give my imagination paranoia. Merciful heavens, I rememered, there was a large new police station at the corner of the street. We passed it on the way home every night. I could see dozens of Dixons of Dock Green pouring down the steps, waving notebooks and saying, “Wot’s all this ‘ere. Indecent ‘hexposure in Richmond.”

“You know where I put my clothes,” I said to my friend,

“Oh yes. I know. the point is that YOU don’t and you really must learn to look before you leap.”

I wasn’t sure what he meant but i had a nasty suspicion. He led me across the greensward and back towards my tree. There was a stream, I remember, and he paused by a willow tree to snap off a long, swishy, wand. He wiffled it through the night air and it made a significant whistling sound.He tapped it thoughtfully against the side of his trousers. My blouse had been hung over a low branch as we reached the tree, a mute sign and token that he did indeed know where the rest of my clothes were hidden.

“Face the tree! Embrace it!” he commanded.

“Look before you leap Paula,” he said grimly, “and learn the difference between made up fictional fantasy and a different but, I promise you, solid reality.”

I felt the texture of the rough bark against my breasts and my belly.

“You can stop me at any time” he said, “But if you do you will have failed.”

I gritted my teeth, determined not to fail.

A thin whistling sound and then white hot fire across my defenceless backside. “Wow!” I went right up on my toes with shock IT HURT! My goodness but it hurt. A yell came jumping up my throat and I changed my mind about being brace and stoical and all that stuff. And then, even as i stifled the shriek, I also felt the afterglow. The pain was horrendous but the afterglow was radiating outwards and it counterpointed the pain almost at once.

My friend was peering at the mark he had written in scarlet pain across my posterior.

And he did. It is long ago and far away from me now. I live in a different place and in a different world but I have never forgotten it. The blows of the damnable willow rod struck me in strange rhythms I couldn’t analyse. They bit into me like teeth, they drove me right up on my toes with a desire to escape the pain. At other times they whispered so lightly I could hardly feel them, but at  the moment I relaxed, thinking it was all over, they whammed through the air and hit me in a crescendo so fast the afterglow was killed before it had a chance to spread. My hands were dry and then wet with sweat as I clasped the tree. It hurt.Make no mistake about that. It always hurts. But something also builds and builds and builds. I was going up on an adrenalin high. I didn’t know that it was what it was. Not then.

Suddenly when I knew I could take no more, he stepped back and dropped the wilowl wand.

I put on my blouse and left him to carry the rest of my garments. I walked back to the house, all glowing and radiant with success, naked under my blouse, which was just long enough to cover the stinging weals on my bottom. Who would ever know?

“What was the rhythm you were using?” I asked.

He grinned his chunky grin. “You have just been thoroughly whipped to the percussive beat of  Rachmaninoff’s Piano Concerto” he said. “But only part of it. Next time we’ll try the Warsaw Concerto and then the theme from The Glass Mountain. Do you begin to know what this is  all about Paula?”

No, were never did try the Warsaw  Concerto, or the Glass Mountain. Two days later he received a call to join a symphony orchestra up North. He went without a backward look. He never came back although I catch glimpses of him on the telly form time to time.

It was five years before I met the famous, or, if you prefer it , the infamous Dr. Murat. But I have written about that else where, have I not? 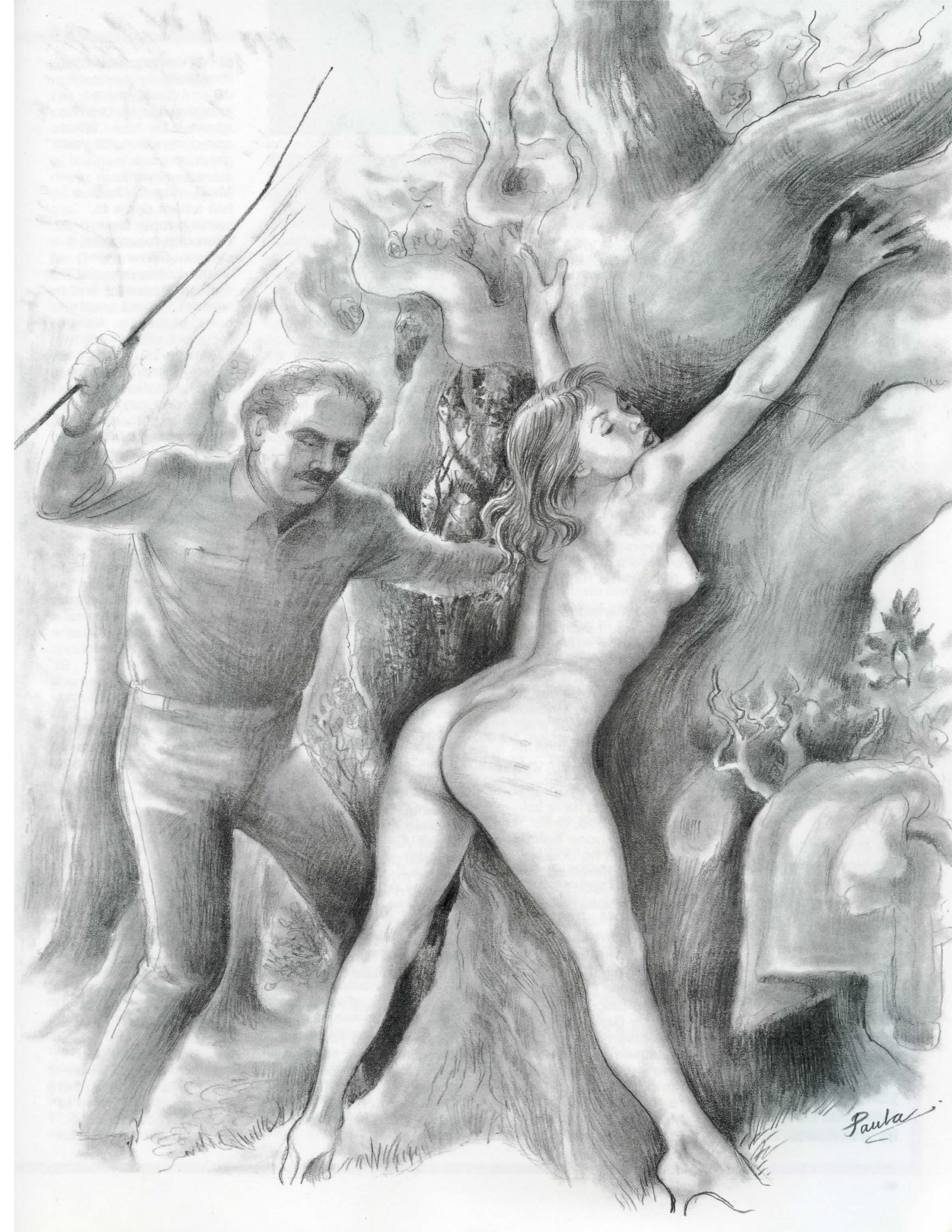