The second part of Fiona Lewison’s true story about her journey into the world of spanking. You can read part one here. 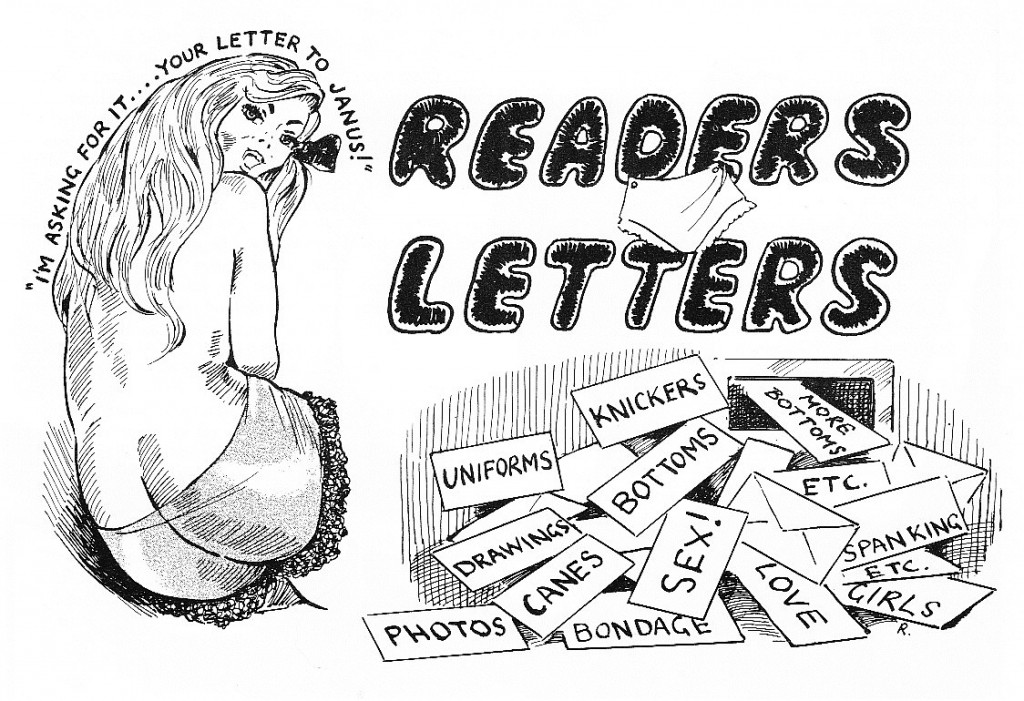 I’d quit nursing by this time, and was working as a temp with the Alfred Marks agency. I was young and single and keen to experiment and, as my fascination with punishment grew, I felt a need to be more involved. What I wanted more than anything else was to appear in Janus. I knew I would make a good schoolgirl. I knew I could look scared and submissive just how the other  models did, and I knew I could take a few whacks on my bottom if necessary. In fact, I wanted to take a few whacks. I wasn’t the prettiest girl on the block, but I was slim and petite and I knew I had a nice figure. I went to Peter Jones on Sloane Square and bought everything I thought I might need. A ridiculously short pleated games skirt, a white blouse, a real school tie, huge tight-fitting gym-knickers, white knee socks and a pair of very boring flat shoes. I even found a ‘Prefect’ badge in a shop on the King’s Road. I bought a pinstripe two-piece with a short skirt and some pretty underwear in case I had to be a ‘secretary’, and a flowery dress in case I had to be someone’s daughter or niece. I wanted to be ready for anything.

Buying the uniform was an interesting experience, to say the least. This was about 1980, and Peter Jones was a pretty stuffy department store in those days. I think the woman who served me knew exactly what was going on, or thought she did (i.e. dressing up for a boyfriend), but she was very helpful nonetheless.

“Are these for Madam?”

“Is Madam going to a fancy dress party, perhaps?”

(I panicked at this point): “Yes, that’s right. A fancy dress  party.”

When I got outside I felt a strong urge to go back and tell her the truth:

“Are these for Madam?”

“Is Madam going to a fancy dress party, perhaps?”

“Actually, I’m going to be a Janus model. Do you know what Janus is?”

“I’m not familiar with the publication, Madam.”

“It’s a spanking magazine. You know, pictures of girls having their bottoms smacked.”

I resisted the urge.

I went back to the Janus shop about a month after my first visit, and began to go quite regularly. Now, I felt confident enough to march straight in. I was ‘out’ and proud of it, or so I thought at the time. I didn’t have much money in  those days, and couldn’t always afford to buy something, but I was happy just being there, soaking up the pictures and enjoying my ‘membership’ of this club. It was around this time that I saw another woman in the shop for the first time.  Two women, in fact. They were about my age (22/23), expensively dressed and supremely self-confident. One of them led the other straight to a particular magazine, opened it and pointed to a photo. I stared unashamedly, and listened to their every word. The conversation went something like this:

First woman (indicating the photo): “How about this? What do you think?”

Second woman: “Not sure.”

They then left as quickly as they had arrived, leaving me with a million unanswered questions. I hadn’t been able to see what magazine they were looking at, so I couldn’t even begin to imagine what it was about the image that was “too full-on”. Perhaps they were after something that suggested, rather than showed, a girl being punished. Something more subtle. But the shop was full of such pictures. That was the art of so much of that material, especially the covers. What did they want it for? What had driven these two successful-looking women into a shop that sold spanking magazines? I’ll never know, but it intrigues me to this day.

The next woman I saw in the shop was even more of an enigma. She was very young, perhaps 18 or 19, and her face was bright red with embarrassment. She smiled nervously, then took a cane from its hook and handed it to the man on the counter. It wasn’t the same man who’d been so good to me, but he didn’t bat an  eyelid. He simply bent the cane into a circle (which surprised me as I thought it would snap), secured it with a bit of Sellotape and popped it into a bag. She paid and scurried out onto the street. I was open-mouthed with astonishment.  What did a young girl want with a cane? (OK, I was still quite naïve back then!) Had she been sent to buy it? Had she bought as a gift for her boyfriend? Was it perhaps needed for a perfectly innocent photo-shoot? There were, and still are, lots of photography and film production companies in Soho. Lots of reasons ran through my mind, including a naughty thought that her boss had instructed her to bring a cane to work so that he could give her a good hiding for her spelling mistakes. It occurred to me that my spelling wasn’t all that good either …

This continued for about a year. I bought a magazine whenever I could afford  it, and rushed home on the 24 bus to get back into my lovely dream world. Then one day I wrote what I still refer to as ‘The Letter’. It was addressed simply to: Janus, 40 Old Compton Street, London, W1, and it was an application to be considered for a Janus photo-shoot. I enclosed a head-shot taken in a photo-booth  in Victoria Station and an out-of-focus snap of me in a bikini taken on a beach  in Greece. It could not have been more amateurish. I put a stamp on the envelope, and left it on the table by the front door so that I wouldn’t forget it in the morning. I still have it, which tells you that I didn’t summon the  courage to send it. Here it is, word for word:

It seems naïve and girlish when I read it now, but I still get a pang of sadness every time I think about the missed opportunity. For all I know, the editor might have turned me down as ‘unsuitable’ or ‘lacking in experience’, but in any case my ambition to become a Janus star was not to be. I regret it to this day, although it might have caused all sorts of complications in later life.

Then I started going out with a guy called Steve, and my life changed dramatically. He was adventurous in everything he did, particularly in bed. I hadn’t had much experience with men, and the experiences I had had were not always happy ones, but Steve opened my eyes to all sorts of things I’d never done before. I felt happy and liberated. We didn’t do anything outrageous, but they were things I wouldn’t tell my mum about. And that was the point, really. I felt grown up at last. One day he asked if he could spank me. Now, you’ll have  to bear in mind that, although I’d fantasised about this moment for years, I’d never actually been spanked. It was still an unknown. I said ‘yes’ straight  away, partly because I wanted to please him, but I was very nervous about it.  Would I feel stupid, or embarrassed? Would it hurt too much? What should I do or say? Would I be any good at it? I simply didn’t know. I asked whether he would like me to wear my school uniform, and I don’t suppose it will surprise any of  you to learn that he jumped at the idea. So there I was, dressed very smartly and lying over the lap of my first ‘teacher’. I was back at Malory Towers in an agony of anticipation. For Steve it was a sexual act pure and simple, but for me it was something infinitely more important. I can still remember closing my eyes and breathing deeply as he lifted my skirt and took my knickers down and began to smack me. It should have been the happiest moment of my life, but it wasn’t. In fact, as is so often the case after such a long build-up, it was a huge disappointment, and for one simple reason: he didn’t do it hard enough. It was entirely understandable. He was a nice guy and the last thing he wanted to do was hurt me. For him, it was largely, if not entirely, symbolic. But I felt nothing but sadness. My only consolation was that 10 minutes later I was ravaged by an uncharacteristically rampant tiger. It had clearly turned him on, and that’s what it became for us: a sexual hors d’oeuvre mainly for his pleasure. I told him that he could do it harder if he wanted to, and he did, but the difference was marginal. I don’t blame him in the slightest, but he just wasn’t capable of satisfying me in what had become the most important of my needs.

We split up about a year later, and I drifted back to my fantasy world. I went back to the Janus shop a few times, and the magazines comforted me in my solitary existence. But I was becoming increasingly frustrated just looking at  pictures and reading fictional accounts, despite the fact that they still seemed quite real to me. I envied the models, and wanted desperately to take part somehow. What I really wanted, of course, was a man to spank me properly, to give me a punishment that hurt and made me come to terms with aspects of my  behaviour that were becoming self-destructive… 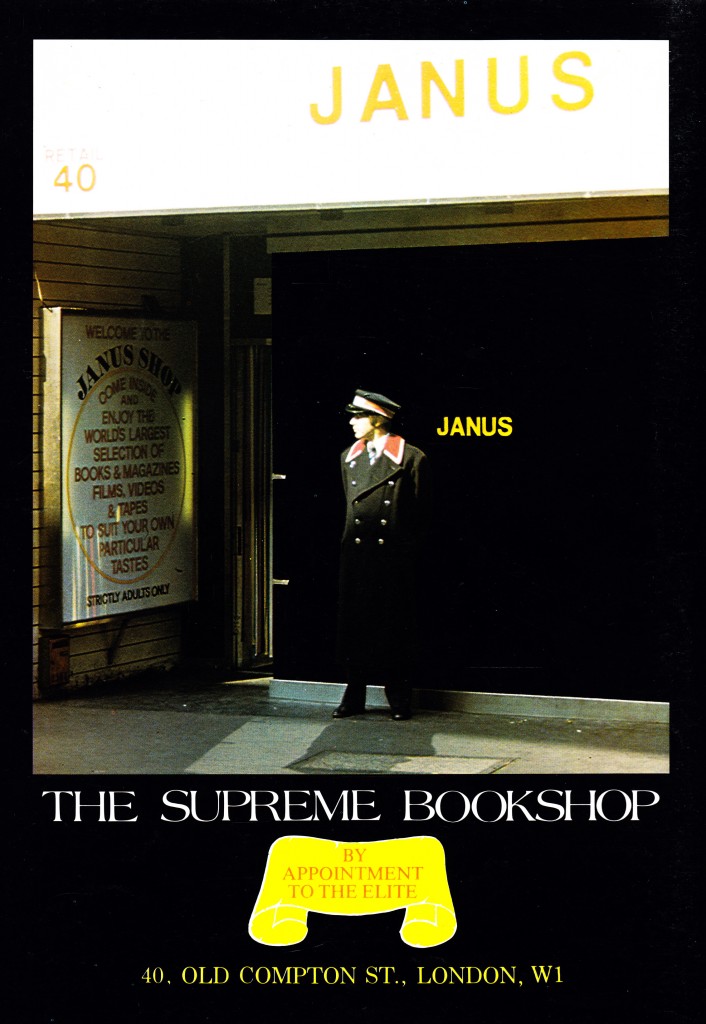 The final part of Fiona’s story, ‘To Love, Honour and Obey’ can be read here.