Janus 39 features a masterclass by Janus photographer Vic Barnes on how to create the perfect caning photo fantasy.

Set in a Corrective Institute for teenage girls run by Arthur Jardine (Janus 23), the photo fantasy details the correction of two young women, Sarah Denton and Wendy East (Janus 45). We’ll be featuring some high quality images from both of their punishments on this page in the next couple of weeks but we wanted to highlight some of Vic’s peerless work with regard to Wendy East. 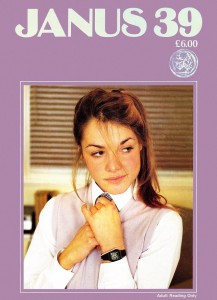 Firstly, what can be said about the front cover image? Let’s face it, as a spanking enthusiast you would buy this magazine without the need to look inside! That sly, knowing, sideways glance and those wisps of hair almost innocently out of place suggest this is a young woman in need of correction. 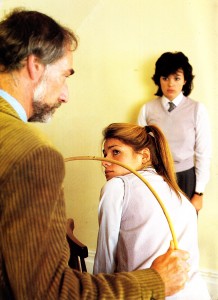 The first colour plate captures the prelude to this drama on the faces of everyone in the room. The steely determination of Mr. Jardine, the disbelief and shock at what is unfolding for the witness and the fearful anxiety of the intended recipient, who can barely meet the gaze of the man who is about to cane her. We can perhaps imagine Wendy’s attention alternating between Mr. Jardine and the cane he flexes with such menace. What a difference between Wendy’s expression in this photo and on the cover. 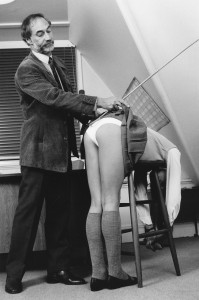 The above photo is powerful because the look on Mr Jardine’s face suggests the lifting of this skirt is just a routine and perfunctory aspect of his work. We can only imagine all the other young women who’s bottoms have been the subject of this disciplinarian’s attention. 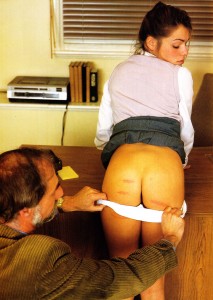 After several strokes of the cane have been administered, Arthur Jardine slowly lowers Wendy’s knickers to reveal the welts on her pale bottom. Once again though, it’s the expression of contrition and shame on Wendy’s face that makes the image so potent. 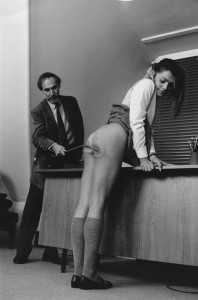 Finally, this delicious impact shot is all the evidence we need that a proper caning has taken place and been captured for our delight.

It’s the performance Vic manages to get from all three particpants and the composition of his shots that sells this fantasy to viewer. It remains a very fine example of his work.

You can download a copy of Janus 39 by clicking on the highlighted link.