Those of us of a certain age will fondly remember the head girl at St Winifred’s, Jilly Norton. It was her first appearance, sitting primly and nervously on the front of Janus 12 that stirred many early teenage fantasies for this correspondent and one look at that cover still brings back memories today. She appeared again briefly in Janus 14 as the subject of a letter with photos from her husband (‘A Saner Caner’ – page 54) which is well worth checking out if you are interested to know about the regular punishments she recieved from him.

I can reveal that the model herself actually had been a head girl at a very well known private girl’s school and that’s not hard to believe when we see her both handing out and receiving punishments in the St Winifred’s Trilogy which can be downloaded here. A selection of stills from the video were featured in Janus 15, which is also available as a digital download.

Norton was one of the early stars of modern Janus and we thought you might enjoy seeing an unpublished photo from her St Winifred’s appearance. 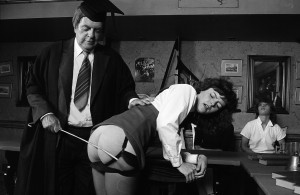