Fiona Lewison reflects on the different roles women play in spanking magazines and their enduring appeal.

It occurred to me the other day that, over the course of my life, I’ve been a daughter, a schoolgirl, a nurse, a secretary, a girlfriend and a wife. I’ve never committed a serious criminal offence, so I haven’t been summoned to a meeting with the Moral Welfare Officer. I’ve never been a flight attendant, a maid, a shop girl or a Wren. But, apart from these, which are niche even in our little world, I’ve lived through pretty much every female role in the pages of Janus and other magazines of its kind. So I thought I’d take a look at these different roles to find out why they’re so popular, and hopefully to get your views on the subject. Do you have a favourite school or domestic photo-shoot? Is there a particular scenario that touches a nerve in you? Does it matter who the woman is, as long as she’s getting her just deserves? I tend to agree with this last statement, and that the stereotype merely adds spice to an already stimulating picture in our minds. But perhaps you have a different view. 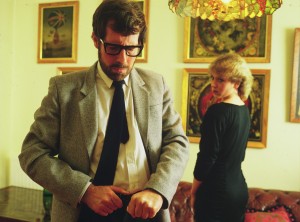 A little research seems to show that daughters generally appear in spanking magazines only when they’re someone else’s. It’s an interesting distinction, and perhaps the editors and the audience of the time felt that direct parental discipline was somehow off limits. Was it too close to home? Was it considered inappropriate? There’s a perfectly good argument against a photo-story showing a man smacking his own daughter’s bottom. But surely we would all accept mum doing it? It’s a cosy domestic scene; a glimpse into a private affair that we feel a sense of privilege in seeing. We can easily believe in the maternal instincts at play, and we know that it’s not motivated by sexual desire. And yet, despite this, it’s very sexy. The daughter is at least 18, she’s probably going out to work, and she almost certainly has a boyfriend. But she’s not too old to be turned over mum’s knee and taught a lesson that we all know is good for her. It has warmth, and a sense of justice and usefulness.

But when it comes to someone else’s daughter we have a free rein, and this is where it gets really interesting. Some of the time, in Janus and its rivals, it’s a mum who lacks assertiveness and is at her wits’ end when it comes to her daughter’s behaviour. She has applied to a neighbour, or relative or family friend for help, and we all know what that means: a stay at a strange house with draughty corridors, creaking stairs and an occupant who is not always acting in the girl’s best interests. It’s generally an older man, and he is depicted as having a rather pleasant time in his role as temporary guardian. Tight pyjamas seem popular, as does the suggestion that a girl should not be alarmed or ashamed about being au naturel. And, of course, there’s a daily routine of largely gratuitous punishments involving a particularly ripe and appealing bottom.

Other stories suggest something more subtle. A particular favourite of mine is mum having a little chat with her daughter before the girl skips off to work in her first job. The boss is known for his old-fashioned ways, and the daughter should not worry about anything and just do as he says even if what he demands seems odd and unnecessary. The girl hasn’t a clue what her mum is talking about, but she soon finds out and before long we see her meekly accepting a spanking or a dose of the strap. And the boss, of course, is having a whale of a time taking advantage of the girl’s youth and naivety. All very naughty and delicious. 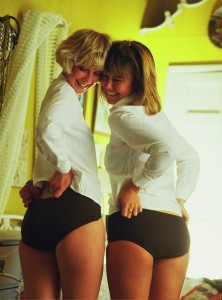 ‘Schoolgirls’ are the staple of any spanking magazine, and for good reason. There’s an implicit unadulterated youthfulness, a sexy uniform and a chance for male readers to identify with a classic authority figure who holds sway over perhaps hundreds of likely candidates for a little ‘personal attention’. There’s also a perfectly valid excuse for corrective punishment. Girls at school today are punished with detentions, gating and exclusion, and it is easy for us to imagine a bygone age when discipline was a more summary affair. It is difficult to justify the prevalence in spanking magazines of male teachers and headmasters with the authority to deal with recalcitrant girls on the bare bottom, but there’s no good reason for that to bother us. It’s vaguely plausible, and we can accept it quite happily. It also makes it much more serious and frightening for the girl. And we like that sense of fear, because that’s what makes it a punishment and not a piece of frivolous nonsense.

Back in the early 1980s, I went to great lengths to buy what I thought was a nice school uniform. From the waist up, and from the knee down, it was entirely authentic: white blouse, striped tie, prefect badge, knee socks, flat shoes. The middle part, i.e. the skirt, was subject to a little artistic licence in that it was, of course, a games skirt. No self-respecting girl would wear such a short item for class, let alone a visit to the headmaster’s study or the punishment room. But, let’s face it, it’s more fun that way, both for the wearer and the viewer. It made me feel young and sexy, even virginal, and I enjoyed the pleasure it gave to me and others.

School punishments in the pages of Janus and its kind, although exploiting a well-used female stereotype, were highly charged, highly sexual affairs. What I found particularly exciting was the glaringly obvious conflict of interest. On the surface, we have a male teacher who is simply doing his duty by the pupils in his charge. We all accept that girls at school should be spanked when they misbehave, and who better to take on that responsibility than an upstanding member of the educational establishment? All well and good, except for the rather unnerving fact that we’re talking about an adult male seeing, touching and smacking a girl’s bottom. It seems to me there’s a strong likelihood that he’ll enjoy this particular duty. And why wouldn’t he? The girl is young, pretty and at his mercy. It ticks all the right boxes. And that’s not the worst of it, as I’m sure you know. Some physical reactions are just unstoppable. And that is grossly inappropriate for a man with such serious responsibilities. So, it’s wrong on all counts, and that’s what makes the fantasy so utterly spellbinding.

Next week Fiona continues her journey through female roles in spanking magazines and considers ‘Negligent Nurses’ and ‘Sloppy Secretaries’.