Alan ‘Badger’ Bartholomew was incensed. The college tutor in science had strong principles and points of view, and was rarely afraid of expressing them. He was also a rugby coach, ex-heavyweight boxer, and an enthusiastic disciplinarian.

Already Badger was acquiring a reputation as a good man to call on in a crisis. He’d successfully dealt with no less than three college girls, members of a triumphant athletics team whose success had sent them off the rails (Janus 142). Then there had been the two females he’d punished in separate sessions on the same day – one, a pretty pop star with an attitude problem, in the morning: then the other, an aloof but deserving civil servant, in the afternoon (Janus 146). His most recent outing, so to speak, had come when a despairing college head called on him to bring a mutinous girl student into line (Janus 150).

Due to past successes in the field, he’d now been given carte blanche by a consortium of local college head teachers to roam at will applying discipline where he thought fit, and in Lois Keane he found his latest focus. She had strolled into school that morning wearing anorak, pants, garish T-shirt and – perhaps most offensive of all – trainers. Lois was ready to refashion the world in her own haphazard image, cock snooks at the teachers and police, make her own rules and to hell with the rest.

Such attitudes did not sit well with Badger Bartholomew’s philosophy… 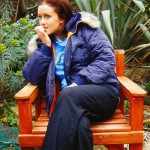 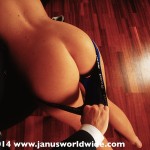 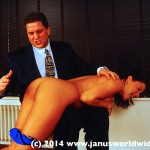 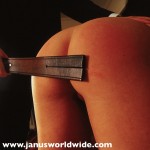 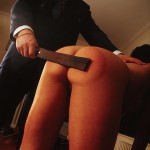 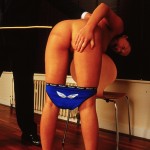 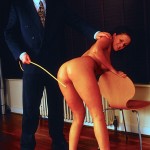 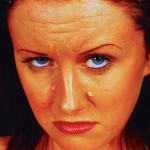 We hope you enjoy seeing this selection of unpublished images of Lois’s punishment, which have been scanned from the original negatives. To see more, you can download a copy of Janus 154 by clicking on the highlighted link.