Google Translate
Basket 0 items Total £000.00
Sign In / Become A Member
Stephanie Gets The Brush-Off – A Spanking Story From Februs

A spanking story by Sophie Williams from Februs 10. More stories are available here.

Of course it had to happen. Given the vast amount of money invested in the fashion business, the total reliance of the shows upon young female models and their increasingly primadonna-like attitude, their whims and tantrums, even on the catwalk,it was inevitable that some form of control had to be introduced.

Armanatta was the first fashion house to appoint a moldel’s house mother – a sort of parent or guardian. The person chosen was the ex-Super Model, Sandra Lowe. Now 35, tall, slim and well acquainted with the world of fashion, she was an ideal choice. She went everywhere with the troupe of Armanatta girls and it quickly became obvious that the scheme worked. Shows became smoothly efficient, and the girls seemed organised and more willing to work.

Public interest paralleled the curiosity of the other fashion houses and Sandra was eventually invited to appear on  Breakfast TV. It was to be her first public interview since she had taken up her job and there was intense interest throughout the fashion world.

The hostess of the Breakfast Show on which Sandra was to appear was Stephanie Walters. At 23 she had made a powerful reputation as a supporter of women’s rights and the tenacity and power which she showed in her interviews belied her slim, almost waif-like looks. As a teenager she had been rejected by the Sandra Lowe Model Agency and she had made some unfounded allegations about the Agency to the local press. The allegations were disproved and Sandra had threatened to pay her back one day for her efforts. That was five years ago but she did not want to meet the woman again and had been reluctant to give the item any air time at all. She had also strongly protested at the plan to catch the interest of even the most casual male viewer by using two Armanatta models as part of the introduction.

She lost the argument and sat silently on the Breakfast Show set as the two girls swayed across the stage wearing the latest Street-wise creations. T-shirts, loose sweaters, trainers, ankle socks and tight blue jeans cut to ribbons across the knees and thighs. The applause was encouraging and the models wafted their way towards one of the large sofas to perch, rather uncomfortably on the edge.

Stephanie waved her hand toward the podium behind her and Sandra Lowe, immaculately dressed in a dark blue suit, glided down to acknowledge the applause of the studio audience. She sank into the armchair alongside her two models, crossed her legs and smiled benignly at Stephanie. Stephanie felt nervous but there was no sign of recognition in the perfectly made up face of the super model.

After a preliminary discussion about Sandra’s own modeling career, Stephanie asked her about her new role. Sandra spoke in a quiet but firm voice, explaining the need to exert some control over the troupes to avoid huge losses and delays. In her own case, she had found the role relatively easy to perform.

She had been appointed as the guardian and direct superior for the models who worked for Armanatta. Her age and experience allowed her to bring a caring but disciplined atmosphere into the often hectic and chaotic backstage world of fashion.

Specifically, she continued, she had two primary functions. The first was to act as a sort of aunt and advisor to the girls. her past experience as a model, as well as her wider experience of life, enabled her to sort out problems, guide and advise the girls and provide the proverbial shoulder to lean on when needed. The second funtion was aimed at ensuring that the girls behaved themselves. They were all bright, intelligent, strong willed creatures but they could often be moody, wilful, wayward, vain, selfish and petulant. On these occasions she had to come down hard on them if the shows were not to be affected.

“And how do you manage that?” asked Stephanie, encouragingly.

“Oh, I just smack their bottoms.”

There was a low gasp from the audience and Stephanie blinked hard. Her mouth dried for an instant but she recovered her composure.

“How? In the usual way of course. For minor upsets I find a sound spanking is normally sufficient but for more serious problems I tend to use something which creates a rather more lasting impression.”

Stephanie gulped audibly. The audience was silent. Stephanie looked around and her eyes caught the two young models sitting on the sofa. They were clearly ill at ease and they exchanged nervous glances with each other. Stephanie plucked up her courage, turned back to  Sandra and asked:

“Smack a model’s bottom? About twenty minutes ago. In the changing are back there.”

Another gasp. The camera panned out to show the audience, sitting in open mouthed astonishment.

“Could you describe… I mean…could you say a little more…,”

“Certainly. These two young ladies were in the changing rooms preparing for their audience. I had left them to go down to Make-Up. When I returned they had almost come to blows over who was going to wear the black sweater. They know that I will not tolerate such petty and wilful behaviour and I immediately took the back of my hairbrush to the pair of them.”

Stephanie stared at the two young models. They were blushing furiously and squirming uncomfortably on the sofa. One of them gave a nervous laugh.

Stephanie’s mind was racing. This was live TV. She had to respond. She just could not believe that these two stunning young women had allowed themselves to be…to be…She found that she couldn’t even frame the words. it had to be a joke, a wind up. A publicity trick that was it! She turned again to Sandra.

“You don’t seriously expect us to believe you. Not in this day and age. Now, come along Miss Lowe. This is all a joke – and a very poor one at that.”

“How dare you call me a liar! Girls! up and over, please.”

The models slowly and reluctantly rose to their feet and turned their backs to the camera. They knelt up on the sofa, leaning over the back and pushing out their hips. The cameras zoomed in. It was not only the knees of the jeans that had been cut. Through the festoons of ragged denim could be seen the deliciously firm cheeks of their out-thrust bottoms, each flushed a deep red. Both girls had quite clearly been on the receiving end of a very sound tanning in the recent past. Sandra Lowe patted their rumps gently and told them to get down. The girls scrambled off the sofa and made a hasty retreat to the back of the stage.

“Now do you believe me?”

“Now I remember you!” Sandra leant forward, her face set in an angry frown. “You were the little bitch who tried to get the Agency closed. You told the papers it was a den of prostitution! You were a nasty piece of work then and you haven’t changed. I’ll teach you to call me a liar in public.”

Sandra grabbed Stephanie by the perfectly pressed collar of her jacket and hauled her to her feet. In the control booth all camera operators were instructed to keep in tight on Stephanie.

Sandra dragged the protesting hostess across the set until she reached the sofa which , until recently , had been the resting place of the two embarrassed young models. Throwing herself backwards onto the sofa, Sandra pulled Stephanie after her so that the hostess landed in an ungainly heap across her lap.

Sandra say up, gripped Stephanie’s hand in hers and pressed her elbow into the girl’s back. She hooked her leg across the girl’s calves and then calmly proceeded to unzip the short dark skirt. Stephanie swore viciously and yelled at the floor manager to cut transmission as she felt her skirt slide down around her knees. her language became even more colourful as her briefs joined her skirt.

The floor manager cut transmission and played a tape of a stand-in interview, but he made sure the studio cameras continued to record the scene. He watched his monitor. Stephanie had a delightfully pert rear and it was well worth filming. Admittedly it was wriggling about rather a lot and the cameras had to pull back to avoid losing their shot.

The audience watched with bated breath as Sandra quietly opened her bag and took out a bright red hairbrush with a broad flat back. Sandra adjusted her position, hoisted the struggling Stephanie further forward so that the cheeks of her bottom were a little higher. The Floor Manager licked his lips as he contemplated that eminently spankable behind and the sales potential it represented in private videos.

“I usually set a maximum of six with this one but I owe you a debt which I promised I would repay one day. Today’s the day my girl!”

The hairbrush landed with an explosive crack and Stephanie let out a high pitched yelp – more of shock than pain. She tried to twist free and hurled a flow of abuse at Sandra. She was halted in mid-flow by the sudden arrival of the second well-aimed smack and once again that high yelping squeal echoed around the auditorium.

Sandra wielded the hairbrush with all the accuracy,force and determination she could muster and her efforts were well rewarded. Stephanie’s rump became increasingly tender as each smack added to the fire which seemed to course over the skin. Her hips bucked and reared as she tried to avoid the stinging cracks but she only succeeded in lifting her buttocks higher and rounding their curves even more invitingly. Sandra carefully alternated each spank, ensuring that the whole of this beautifully moulded seat received equal coverage.

Stephanie howled like a whipped puppy and began to beg for mercy before the first six smacks had been completed. By the ninth she was in tears and by the twelfth she had regressed to a babyish whimpering, promising to be a ‘good girl’ if only the ‘horrid spanking’ would stop.

It did, with a last blistering crack which propelled the girl forwards onto the sofa seat. She lay there, sniffing and groaning, her hands gingerly stroking the burning orbs of her glowing bottom. Sandra carefully replaced the hairbrush in her bag and turned to leave, pausing only to pat the squirming Stephanie on her throbbing rear and say, in a  ice cool voice:

“I have so enjoyed our little chat. I do hope we can do it again sometime.” 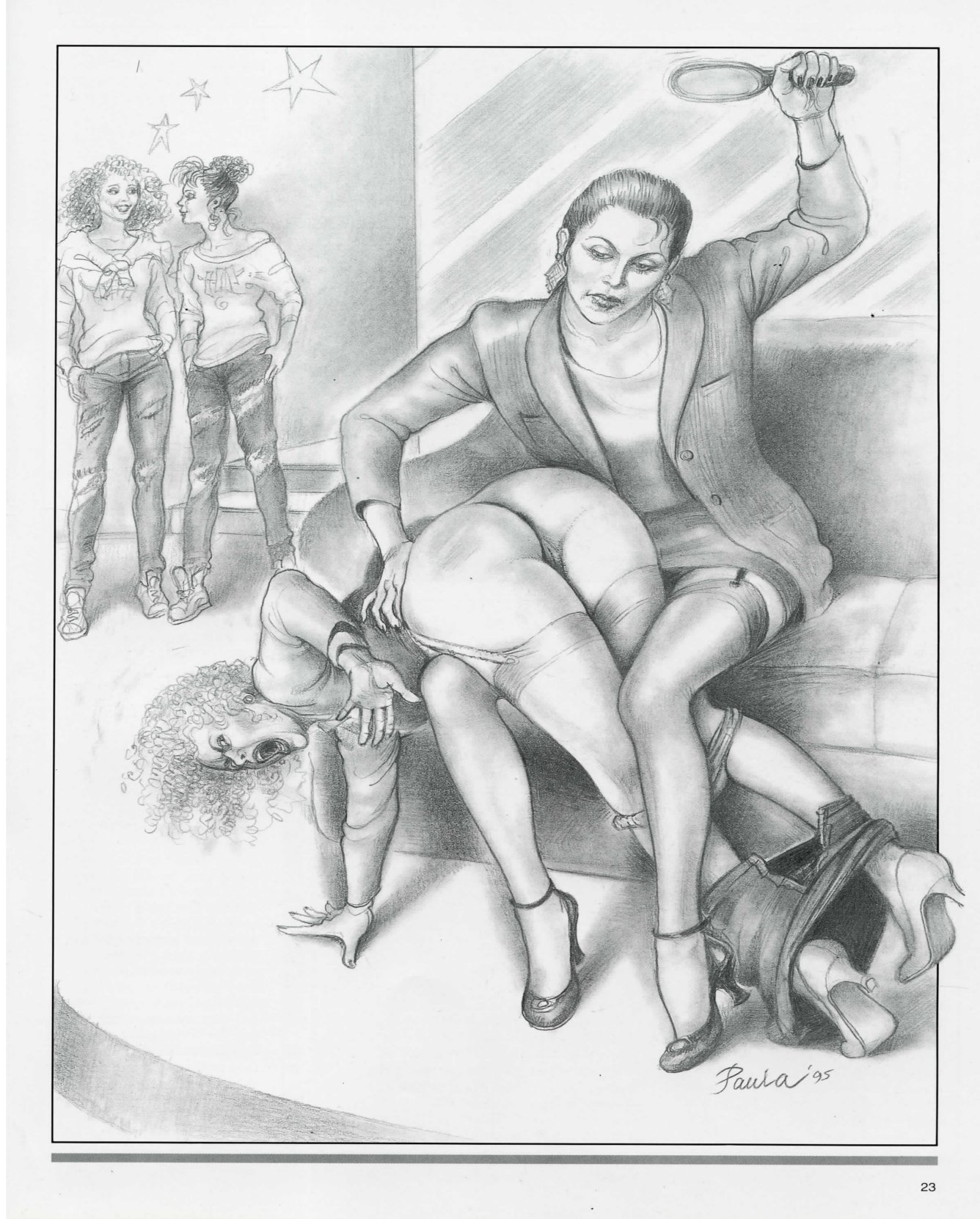