The readers’ letters page was always a popular section of any spanking magazine because you were guaranteed an entertaining read from a rich variety of contributors. Content ranged from the sublime to the ridiculous with genuine accounts scattered amongst all the make believe. One particular letter which stood out for this correspondent appeared in Roue 6 which was published in the early 1980′s. Entitled ‘Ephemera’ it seems to have the ring of truth about it but I’ll let you make your own mind up…

The photographs on this page arrived at our offices with this letter:

“I found these photos and several letters in two suitcases which I discovered in the attic of the house I now live in. I bought the house three years ago, which is when I found the photos. Perhaps you will be interested. The only things I know which might be relevant are these:

1 That the house was previously owned by an ex-army man, to judge by various documents found in the cases. I presume the photos were his but as he is now deceased I do not know for sure.

2 From two of the letters I gather that the gentleman at one time advertised for a housekeeper, and that the post was taken by a girl from Broadstairs  in Kent. This information I gleaned from the first dated letter which set out her qualifications for the job and said that in 1954 she was 21 years old. Out of curiosity I wrote to the address on the letters and found out that it was a guest house, and was so at the date mentioned. No-one remembered the girl. Perhaps she once lived there or stayed there, and took another job at the end of the holiday.

3 From one of my neighbours who has lived here for 30 years I understand that a girl did live in my house at the time in question. The name of the girl which is frequently mentioned on the back of these photos is ‘Susan’ – she also wrote the letters I mentioned. The dates of the photos run from 1955 to 1957 and there are several hundred more photos but I’m sure you will appreciate that I couldn’t send them all.

The photos were certainly taken in my house, as some structural details are familiar, in particular a fire place in the smallest bedroom, which I suppose may have been Susan’s room, and the desk in one of the photos is very similar to one which was serving as a bench in the shed when I moved in. It seems to me that the photos have a posed look about them but some of the cane marks on the girl’s bottom look too real to have been faked. Perhaps the photos were taken with a time-delay system which would explain the posed look.” 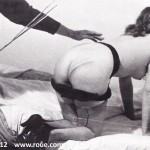 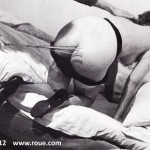 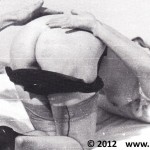 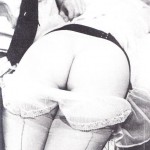 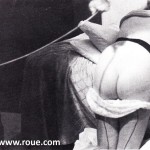 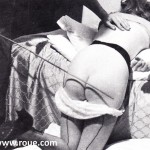 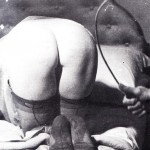 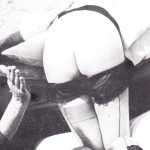 I guess we’ll never know the truth of this story but to see a lot more of Susan and read A.M.’s full account over six pages you can download a copy of Roue 6 here. Another letter from A.M and more photos of Susan appeared in Roue 8 which will be available to download soon – watch this space.