Long time readers of Janus might remember our correspondents David and Carol who wrote to the magazine many times during the late 1980’s and 90’s. Both of them would describe their experiences of administering or receiving punishment and their contributions provoked much discussion from other readers.

We are pleased to feature some photos of Carol that appeared in issue 99 alongside David’s letter describing the caning she received in earshot of her mother. These photos can be seen in colour for the first time. 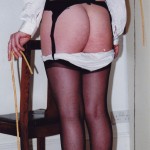 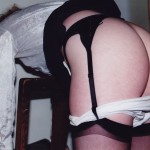