A Janus Spanking Story from Janus 90. More stories can be found here.

Would there be a future with Jeremy? Would he still want her after her lapse? 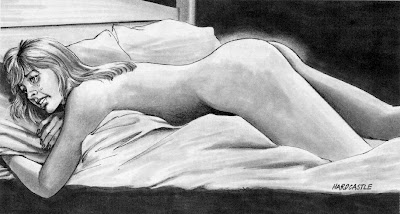 Titian-haired Rachel threw herself on the bed once Jeremy had gone down the stairs. She was naked apart from her black French knickers which were somewhat ignominiously around her ankles.

The exuberantly curved 25-year-old lay with her pear-shaped breasts squashed into the duvet. Her bottom was in a right state. The lovely mounds were an angry scarlet all over their full and rounded circumference.

The nubile, green-eyed trainee accountant had expected some kind of reaction when stockbroker Jeremy found out that she had been ‘having it off’ with the plumber who had repaired the central heating. His reaction had, however, taken the redhead completely by surprise.

Rachel had, naturally, expressed her sorrow over the incident. Jeremy had stood over her, tall, authoritative and angry as she had cowered in a chair. He had sarcastically suggested that the emotion she felt was merely regret over her tactical error of being caught out, rather than bitter sadness at having violated the trust he had placed in her.

Rachel’s pain-racked body shook as she sobbed her heart out. In her torment, she still wondered if Jeremy’s reaction would have been quite the same had her ‘one-off’ lover been a professional person like themselves and not a tradesman. Very class-conscious was polo-playing Jeremy.

One manicured, sculptured hand slowly made its way to her glowing bottom. Rachel could hardly bear to touch the scorching flesh. She had never realised that the back of a hairbrush could hurt so much.

During her ‘inquisition’, Jeremy had asked her if she had enjoyed ‘shagging the plumber’, as he so crudely termed her indiscretion. Rachel had lied and said ‘No.’ He had asked her again during the punishment and she had repeated the lie. Then the speed and the force of the hairbrush smacks on her bare bottom had increased to a frenzied tattoo. She now reflected that Jeremy couldn’t possibly have been expected to believe her answer. The faster and fiercer the stiff back of the brush had fallen, the more that point had been driven home to her.

‘He wasn’t as good as you – honestly!’ Rachel had screeched, her long, elegant legs kicking about but restrained to a degree by the French knickers which had been roughly dragged down when Jeremy had got her over his knees.

That urgent remark had been a fib, too. The young plumber had been every bit as good in bed as Jeremy was – no better, but certainly just as good. And excitingly different. Not as tenderly sensual, but more vigorous, more urgent…

Jeremy could only match that rhythm with the hairbrush!

Would the dreadful sting ever go away? Her bottom throbbed incessantly. Jeremy had certainly given her something to remember. Whenever she happened to recall the illicit lovemaking with the curly-haired, tattooed plumber who was barely out of his apprenticeship – as she was bound to do in idle moments – then any pleasurable recollections of the intimacy would be completely obliterated by the memory of this burning punishment. She would have to remember exactly what Jeremy had done to her superbly-rounded, eye-catching bottom. Upon which the randy youngster had especially complimented her!

That same bottom was now a hot globe. If she ever did dare to sleep with someone other than Jeremy in the future, she would make sure that he could not possibly find out about it. Rachel could not go through this fiery stinging torture ever again.

Would there be a future with Jeremy, though? Would he still want her after her ‘lapse’? Hell, she hoped so. Apart from thinking that she did actually love him, his high income kept her in the luxury she enjoyed. Actually, there was no need for her to go out to work herself, but she wanted to qualify as an accountant. Jeremy wished her to have letters after her name as well.

Her ‘handsome hunk’ as she affectionately called him had really hurt her, so he must have been terribly upset over what she had done.

Should he have been, though? It wasn’t as if they were actually married. She didn’t have his ring on her finger. Furthermore, Rachel knew that Jeremy had ‘had it off’ the previous year in Barbados with that sun-kissed blonde from California. She hadn’t said anything about that!

She hadn’t said anything because, at that same time, she had been clasped in the arms of a very well-endowed Mexican waiter! Up to then she had only fantasised about ‘a bit of rough’, but now…

The pretty face, distorted with crying, was raised up from the damp patch on the duvet. The agony in her emblazoned rear was starting to ebb slightly, but she knew it would be some time before she would be able to sit down.

Tentatively, Rachel moved her shapely limbs. She winced at the pull of taut muscles upon the well-spanked flesh of her tenderised behind. It was a behind which Jeremy had always admired. All her past boyfriends had liked it too, but only he had ever made her feel that her bottom was her sexiest part of all. And how!

The experience of being punished for her unfaithfulness had been absolutely awful. Gulping for breath, Rachel had struggled with the pain. It had become so acute, however, coursing through every nerve and fibre of her body, that she had begun to cry out. Surely her yelps and squeals had been heard by the people in the flat below, for their lights were on. Still, they hadn’t come up to ring the bell and see if she was all right, thank God.

Rachel made to move some more. The twinges shooting through her made her shake her head from side to side, wincing and gasping, and her curls tumbled over her wet, flushed face in a red silken stream.

That hairbrush was going to have to go. Whenever she saw it on the dressing-table in future, Rachel knew she would flinch away from it as if it were a pair of thumbscrews or something just as horrible. But what if she had to go? Maybe the ordeal with the brush was only a part of her punishment for allowing that bloke the temporary freedom of her body. What if Jeremy actually chucked her out? It didn’t bear thinking about. Rachel loved the lifestyle that her friend Jennifer enviously said she had ‘lucked into’.

She would have to make herself get up and go downstairs and beg forgiveness from her ‘real’ lover. Ooch! Not just yet, though!

How many times had she cried out, ‘I’m sorry! I’m sorry!’ as that hard smooth oval had smacked into her buttocks? Had Jeremy believed her?

Now that he had inflicted agony upon her bottom which he so often called ‘delicious’, had he acquired the taste for it? And between them, would she ever live it down?

Suddenly, Rachel felt a hand running caressively over her still smarting, throbbing derriere. She propped herself up on her elbow and turned her head. Rachel hadn’t heard Jeremy coming up the stairs and re-entering their bedroom.

He sat on the edge of the bed and his stroking hand began to apply soothing cold cream to her twin hummocks. It reduced the pain immediately.

Rachel showed her live-in lover a flushed, tearful and repentant face. He gave her a half-smile and one eye closed in a wink.

She turned her head back again and buried her face in the damp duvet once more, her prone body relaxing on the crumpled cover. Jeremy could not see the sly smile on her face as she parted her thighs in case he wanted his fingers to do anything else.

Rachel, sighing now, knew that all was forgiven.